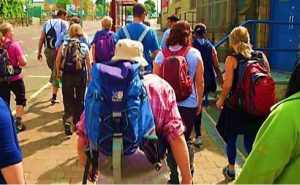 Each year thousands of asylum seekers, fleeing persecution in their own countries, come as strangers to seek refuge in the United Kingdom. By the summer of 2005 a number of churches in Bradford were finding asylum seekers in their congregations. Not only did these newcomers enrich the worship and fellowship of those congregations but local people and ministers began to discover the real hardships that asylum seekers face. BEACON was set up out of a shared concern to address the practical and spiritual needs of the many asylum seekers and refugees who now live in the Bradford district.

How Does BEACON Work?

BEACON is a registered charity which is funded through voluntary donations from individuals & faith groups as well as grant making organisations. It has a Board of Trustees, which was elected from BEACON membership in July 2007, a small team of staff and more than 45 volunteers.

Donate Help support BEACON's work by donating, or if you'd like to volunteer then please get in touch.

‘Thank you and god bless you for the work that you do. A smile, a tea and biscuits, goes an extremely long way in my view.

It was a pleasure to meet with you this morning and the work that you do is priceless.’

A barrister attending a hearing at Phoenix House, November 2014.